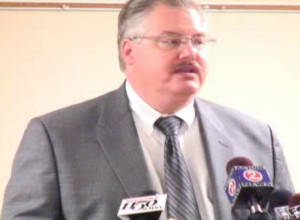 The State Supreme Court has issued a four month suspension for the law license of a former district attorney who got caught up in a sexting scandal. Former Calumet County DA Kenneth Kratz came under fire in 2010, after it was discovered that he sent sexually-charged text messages to a domestic abuse victim while he was prosecuting the man accused of attacking her.

Kratz sent nearly two dozen messages in the fall of 2009 to the 25-year-old woman, who had been beaten and strangled, including: “Are you the kind of girl that likes secret contact with an older married elected DA . . . the riskier the better? Or do you want to stop right know (sic) before any issues?” Kratz also told her that she was “beautiful,” and texted “I’m the atty. I have the $350,000 house. I have the 6 figure career. You may be the tall, young, hot nymph, but I am the prize! Start convincing.”

Several other women came forward after the incident became public and Kratz resigned when then-Governor Jim Doyle launched an effort to remove him from office. He blamed a sex and prescription drug addiction for his behavior.

Kratz eventually pleaded no contest to six counts of misconduct before the state Office of Lawyer Regulation, with other charges being dismissed. OLR had recommended a six-month suspension, but the Supreme Court agreed with a referee’s recommendation of four months. Kratz, who currently works as a private attorney in West Bend, was also ordered to pay nearly $24,000 to cover the cost of the proceedings against him.