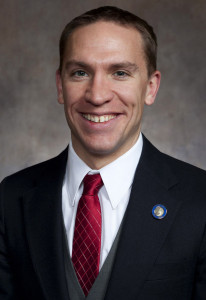 Update: GAB staff recommend the full Board accepts the declaration of candidacy filed by candidate Lasee as valid, verifies a total of 581 signatures, dismisses the complaint in its entirety, and grants ballot status to candidate Lasee.

The Democratic Party of Wisconsin is trying to keep Republican state Senator Frank Lasee off the ballot, saying he doesn’t live at the address he listed on his Declaration of Candidacy — a violation of state statutes.

State Democrats filed a complaint with the Government Accountability Board accusing Lasee of living with his wife and kids in Racine, even though Lasee claims his De Pere residence is his primary voting address.

And, Larson says, if Lasee is not tossed off the ballot, he’ll have a lot of explaining to do. Larson says it would set a dangerous precedent if the GAB decides not to enforce the residency requirement. ” He explains, “It would say that anybody can live anywhere in the state and run for whatever office they want to without a connection to that district. And I think that, look, the reason that you have to reside in the district is you have to be connected to the neighbors. It’s to make sure that a person … isn’t somebody just beholden to their own interests and the special interests, money interests, that gets them elected.”

AUDIO: Larson explains why they filed the complaint against Lasee.

Lasee calls the complaint “frivolous,” designed to “bully” his family and take voters’ attention away from the important issues.

GAB staff have been reviewing several challenges filed with the elections agency. The board will make decisions at its meeting Tuesday.