You are here: Home / News / GAB rules on ballot challenges 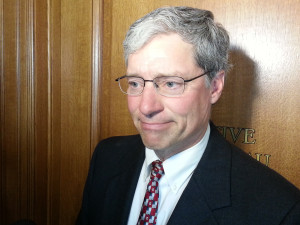 Democrat Brett Hulsey will be able to appear on the ballot in the race for governor. The state Government Accountability Board on Tuesday rejected challenges to Hulsey’s nominating petitions, clearing the way for him to run against Democrat Mary Burke in an August primary.

The Democratic Party of Dane County challenged signatures on Hulsey’s nominating petitions and the state Representative from Madison was recently kept from addressing his party’s state convention over the weekend. Despite that, Hulsey believes he can mount a legitimate challenge to Burke among Democratic voters. Hulsey says he wants to give voters a real Democrat to choose from in the election, and “bring Democracy back to Wisconsin by giving people a choice of somebody who will stand up to Governor Walker.”

The Board also rejected challenges to nominating papers from state Representatives JoCasta Zamarripa (D-Milwaukee), Mandela Barnes (D-Milwaukee), and Kathy Bernier (R-Chippewa Falls). It also turned down a claim from Democrats that Republican state Senator Frank Lasee (R-De Pere) lives in Racine, instead of his De Pere district. Lasee’s attorney, Eric McLeod, called it a frivolous challenge that was “based on nothing but the worst kind of speculation.” In a response to the challenge, Lasee cited the need for his wife to maintain a residence in Racine and him in De Pere because of child custody arrangements.

The board rejected challenges to the Congressional campaigns of former state Senator Gary George and protester Jeremy Ryan, clearing the way for George to challenge Congresswoman Gwen Moore (D-WI) in a Democratic primary and for Ryan to take on Congressman Paul Ryan (R-WI) in a GOP primary.

The GAB did agree with challenges filed against six candidates, ruling that they will not appear on the ballot. It also accepted an appeal for ballot access from Democrat Gary Kauther, who is running for the 25th Senate District. Kauther’s papers were initially rejected because of problems with the headers listing the office he was running for. The board did stand by decisions to keep independent Assembly candidate Craig Krueger and Democratic gubernatorial candidate Marcia Mercedes Perkins off the ballot.