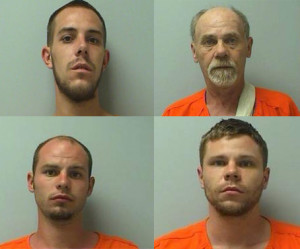 Sheriff Scott Parks says it began Memorial Day, when police got a call about a woman found in the parking lot of Ministry Saint Claire’s Hospital in Weston who had overdosed on heroin. Parks says “Detectives from the Special Investigations Unit were able to put it together relatively quickly that this was a heroin overdose, and they had a basic idea on who the potential deliverer was.”

Investigators were eventually led to 25-year-old Jacob Gould, who they say supplied the heroin used by the woman. He was arrested and charged with first-degree recklessly endangering safety, two counts of delivering heroin, felony marijuana possession, and obstructing an officer. His bond was set at $25,000 cash Wednesday.

While Gould was making a court appearance, Parks says officers went through his house. “As they executed the search warrant at a Mosinee residence, they uncovered information pertaining to the heroin overdose, and also there were two pounds of marijuana, $27,000 in cash, and data and information that would indicate that over 100 pounds of marijuana had moved through that residence.”

Police arrested Jacob Gould’s father; 56-year-old Jerald Gould, along with his brothers; 21-year-old Jeremy Gould and 26-year-old Jerrod Gould. All three are facing preliminary charges of possession of marijuana with intent to deliver, maintaining a drug trafficking place, and possession of drug paraphernalia. They are scheduled to make initial court appearances later today.