You are here: Home / News / Historic base ball at Old World Wisconsin 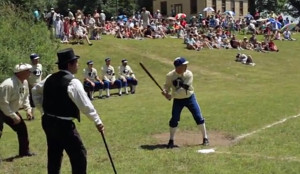 The Brewers may be generating a lot of excitement at Miller Park, but fans will have a chance to see the game the way it was played in the 19th century as vintage base ball returns to Old World Wisconsin this summer.

There’s no instant replay here. “In historic base ball there’s one umpire on the field, and if he feels that he can’t make the call, he simply asks the players whether or not the player was out or safe and they’re expected to answer honestly,” said Dan Freas, Director of Old World Wisconsin and a former player in this game without gloves.

“I can tell you from experience that first inning, when the ball is nice and new and hard and you get a hard hit line drive that you have to field, it can sting the hands a little bit,” Freas said. Old World Wisconsin hosts its first game of the vintage baseball season on Saturday, when the Eagle Diamonds take on the Delton Base Ball Club.

That lack of gloves and other differences in the historic game means the offense tends to have an easier time scoring runs than in the modern game. “If you read newspaper accounts of the 19th century, seeing game with final score of 34-25 is not uncommon,” said Freas.