You are here: Home / News / Hulsey likely gets on the ballot 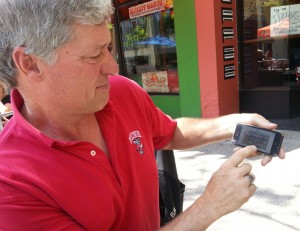 For a while, it was unclear whether State Representative Brett Hulsey — a long shot for governor — would even be allowed on the ballot. “The Democrats are trying to kick me off the ballot. They sent their hatchet man after me.”

The Madison Democrat has collected slightly more than the required 2,000 signatures, some of which are being challenged by the Democratic Party of Dane County. Hulsey was filing his response with the state elections agency on Monday afternoon, arguing it’s a free speech issue. The Government Accountability Board meets today, considering several challenges to nomination papers of various candidates.

Ahead of today’s meeting, Board staff recommended 2074 signatures be verified and grant ballot access for Hulsey in the Democratic Primary Election.

Hulsey is disappointed that he wasn’t allowed to speak at the Democratic Party’s Convention over the weekend in Wisconsin Dells, where gubernatorial candidate Mary Burke was the keynote speaker.

Hulsey stresses the importance of having a primary election in order to “open the discussion” on relevant issues. “I wanna try to work this out in the Democratic Primary. If Mary Burke wins, then I support her, and we go on to beat (Governor) Scott Walker. If the Democrats won’t let me on the primary, then I have to look at a write-in candidacy on the November ballot and I don’t really wanna do that but the Democrats are forcing me to do that.”