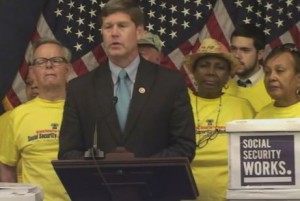 It’s called the Social Security and Marriage Equality Act, and has strong support from Democrats, but not much support from Republicans.

Ron Kind (D-La Crosse) cosponsored the legislation in the House, and says offering equal benefits is the right thing to do.  “We live in, I think, a very rapidly changing and exciting time right now in our nation’s history, when it comes to the advancement of human and civil rights. With numerous federal courts now weighing in, the fact that 19 states do recognize full marriage equality rights for same-sex couples, and 15 states now have had bans overturned by federal court decisions.”

Nineteen states now recognize same-sex marriages, and Kind says federal judges are ruling against state bans including Wisconsin, and Wednesday’s federal judge panel striking down Utah’s ban of same-sex couples. The 3rd District Congressman says eliminating the Social Security discrimination against same-sex couples is just the beginning.  “There’s still more action that this United States Congress can and should take to recognize marriage equality throughout our entire country. That’s why we found it necessary to introduce the Social Security and Marriage Equality Act, the same act that Senator (Patty) Murray was just discussing. It is the right thing to do. The same-sex couples should be able to enjoy the same benefits, the same protection as other married couples.”

Kind says it’s only fair to treat all couples the same, and offer the same Social Security stability for the future that other married couples have.  “This will add a tremendous amount of peace-of-mind and income security for them in their retirement years, and we’re hoping that more of our colleagues in this Congress will get on the right side of history.”

Kind believes America will look back and wonder why it took so long to end this discrimination.

(NOTE: It takes about two minutes before the audio is normalized.)