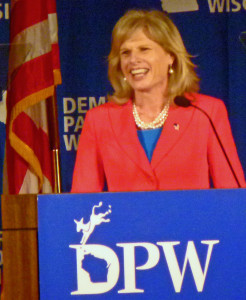 Mary Burke speaking at state convention in the Dells.

Democratic gubernatorial candidate Mary Burke speaks to the crowd of delegates and other Democrats at the party’s annual convention. “Scott Walker has failed in his obligation to the people of Wisconsin. True leadership brings people together, that’s how we do our best work. And true leadership puts people ahead of politics and special interests.”

Burke expresses concern about the direction Governor Walker is taking Wisconsin, saying another four years under the Republican governor would render the state unrecognizable.

Burke says Walker’s “divisive brand of politics has made national headlines,” but she says, “those politics have hurt middle class families” in Wisconsin.

The former Trek Bicycle executive addresses the crowd after 9:30 Friday night. She talks about her dad as her inspiration. “He passed away six years ago, but there is not a day that goes by that I don’t think about the lessons that I’ve learned from him. One was to treat people with respect,” she says, “not just some people, but all people.”

Burke vows to be the kind of governor who tells the truth, puts common sense solutions ahead of politics, brings the people together, and believes their word is their bond.

Wisconsin GOP Executive Director Joe Fadness said in a statement, “While Republicans are moving Wisconsin forward, Democrats and Mary Burke wasted their Convention on stale rhetoric and desperate and divisive attack lines. When Democrats were in control, Wisconsin was in bad shape with massive tax hikes, billion dollar budget deficits and record job loss — a mess that was fixed by Governor Scott Walker.”