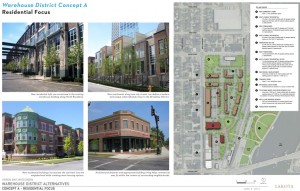 “This is a 50 year decision for our community, and it deserves thorough analysis and community input.” Schmitt said during a press conference Thursday.

The options, according to city staff, are consistent with the Comprehensive Plan and the initial intent of the Planned Unit Development. That PUD is what Walmart is seeking a rezoning of, in order to move forward with plans to build a 154,000 square foot store.

The first option is heavily focused on residential uses, including new townhomes, multi-family residential housing and loft units in the re-use of the existing warehouse. A second outlines an office/retail focus including a new community park, a music venue and a one-story, 35,000 square foot grocery store. The third is a sports and entertainment venue, including a new baseball stadium and a hotel.

“This is realistic, this is doable, and this is something the city would support and get behind like we’ve done with other properties in the downtown,” Schmitt said, adding that he believes it could take at least three years and $3 million in tax dollars to get the ideas up and running.

“The options, if you look at them and get them done, a lot of it is what people are asking for” said city council President Tom DeWane. “I like the Walmart proposal, they’ve got a plan and it fits the needs of the constituents in that area.” DeWane believes that the immediate costs to the city that taxpayers would have to cover is much higher than what city staff estimates.