You are here: Home / Education / Obama expands ‘Pay As You Earn’ to reduce student loan debt 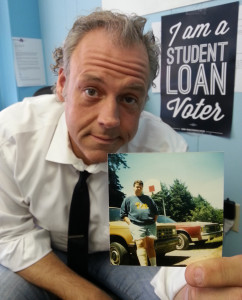 Scot Ross shows a photo of himself in 1988 just after his freshman year in college — and shortly after signing on to what ended up being 26 years of student loan debt. (PHOTO: Jackie Johnson)

President Obama signs an executive order on Monday expanding the “Pay As You Earn” program, increasing the number of student loan borrowers who are eligible to cap their payments at 10 percent of their monthly income. Also, under the plan, the balance of a loan would be forgiven after 20 years — and just 10 years if the borrower works in public service. This move gives an additional 5 million students the same option others were given under earler changes.

Scot Ross of One Wisconsin Now has long been advocating for reform. “According to our research, Wisconsinites pay $3.5 billion every year in student loan payments. Imagine if we could take that money and have it invested in the economy.”

Student loan debt is the second largest consumer debt in the United States, topping $1.2 trillion, surpassed only by mortgage debt.

Education Secretary Arne Duncan says it’s unclear how much the change to the “Pay As You Earn” program would cost.

Ross supports the idea of refinancing student loans when a lower rate is available. He says every consumer protection that’s afforded to commercial transactions was stripped away from student loan holders. “So, for instance, student loans … you can’t discharge in bankruptcy, you can’t refinance them, they’re not subject to state usury laws, and there’s no statute of limitations.” Ross continues, “So, for instance, in American jurisprudence, there are four crimes that have no statute of limitations: kidnapping, murder, war crimes, and treason. We essentially treat student loans the same way now.”

AUDIO: Ross explains negative effects of student loan debt to the borrower and the economy. 1:22

There are 812,000 Wisconsin residents with over $18.2 billion in outstanding federal student loan debt. Obama’s “Pay as you earn” changes won’t take effect until December 2015, but Ross says the passage of the refinance bill would allow student loan borrowers to start getting immediate relief.

According to Senator Baldwin, the student loan refinancing legislation would allow borrowers with federal and private undergraduate loans at high interest rates to refinance at today’s lower rates of 3.86 percent with no refinancing fees.

U.S. Representative Tom Petri (R-WI), a senior member of the House Education and the Workforce Committee, issued a statement on Obama’s executive order:

“The President’s proposal moves us in the wrong direction by taking a complicated, expensive repayment option and simply expanding it. Basing payments on income makes sense, but I’m always hearing from students who need affordable payments but don’t take advantage of these options because the system is too confusing and bureaucratic. At the same time, expanding forgiveness available in the current programs will likely leave taxpayers on the hook for billions in unpaid loans.

“Instead of expanding policies that aren’t working, we need something different. I introduced bipartisan legislation that would ensure all students have affordable payments in a way that is simple and intuitive. My proposal would also protect taxpayers by eliminating unnecessary loan subsidies and forgiveness programs.

“Instead of using his ‘pen and phone’ to make these changes, the President should work with lawmakers on both sides of the aisle to repair our student loan system and help all borrowers who are struggling.”

The bill would raise revenue for the refinancing program by closing some tax loopholes. The so-called “Bank on Students Emergency Loan Refinancing Act” is scheduled for a vote in the U.S. Senate today.