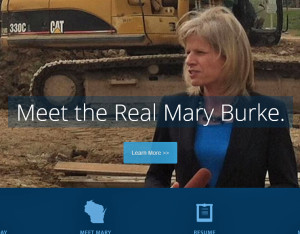 The Republican Party of Wisconsin has set up a phony website aimed at the campaign for governor of Democrat Mary Burke. “My first thought about that was actually kind of shocked, that the Burke campaign would have missed this,” said Steve Noll, a marketing professor at Madison College.

The actual campaign website is burkeforwisconsin.com – the fake is maryburke.com.

“It seems that a web domain as simple as maryburke.com is something that any campaign would register,” Noll said. This isn’t the first time for this sort of phoney site in politics, and Noll said it certainly won’t be the last.

“This is part of the regular politician handbook going forward. And quite honestly, this kind of stuff is known” he said. “Mary Burke’s people should have known of this a long time ago.”

The state GOP apparently grabbed the domain last year when Burke announced her candidacy. The site is similar to her actual campaign site but features negative content. The GOP has promoted the phony site on social media.