You are here: Home / Agriculture / Politicians serve up breakfast and opinions 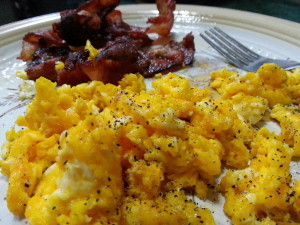 Competing gubernatorial candidates serve a little politics with breakfast over the weekend.

Governor Scott Walker (Republican) and Mary Burke (Democrat) both worked the Breakfast on the Farm in Fond du Lac County Sunday trading swipes at each other when they weren’t serving food. Walker says his administration has created nearly twice as many jobs as Governor Doyle’s did when Burke served on Doyle’s cabinet.

“When she worked for Jim Doyle as Secretary of Commerce, they created about half as many jobs in her three years in that position as we did in our first three years,” he says. “In fact, unemployment now is down to 5.7 percent, the lowest it’s been in 5 and a half years, well below the national average.”

Burke says the state’s economy is lagging behind other Midwest states when it comes to creating jobs under Walker’s administration.

“You know I am concerned about where our economy is headed, and under Governor Walker we are dead last — dead last in the Midwest in terms of job creation.” She says, “I talk to people every single day about how we’re going to grow the economy here in Wisconsin, how we are going to make sure we are a top-ten thriving economy.”

Neither Burke nor Walker talked about recent accusations against Walker in the John Doe probe, though as they were serving eggs and sausage Sunday, the importance of agriculture wasn’t lost on the two candidates. Walker says at $60 billion annually, the agriculture industry in Wisconsin is the largest part of the state’s economy.

AUDIO: Walker says agriculture is growing under his administration. (:18)

AUDIO: Burke says she’s concerned about the loss of farms in the state. She notes nearly 9,000 farms have been lost over the last five years. (:15)

Candidates for the 6th Congressional District race also were out in full force at the breakfast.