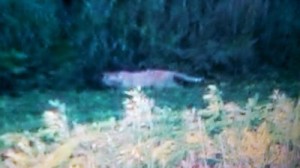 A cougar may be roaming the Janesville area.

Police Sergeant Aaron Ellis says a resident reported seeing a cougar Sunday night about 8:00 p.m. behind his residence. The resident was able to get a poor quality photo from about 300 feet.

Ellis says the public should avoid these animals if they see them and notify the DNR about any encounters.