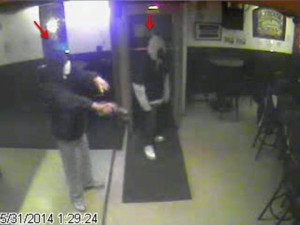 The Racine Police Department has released surveillance video of the two men investigators believe fatally shot another man during a robbery last month at the American Legion Bar.

Officials said the robbers shot and killed 47-year-old Joseph Walker of Racine on May 31st, during an armed hold-up at the bar. The video, along with pictures of the masked suspects, was posted to the Department’s Facebook page.

Police hope releasing the video to the public will result in somebody recognizing the suspects. Tips can be provided anonymously through the Racine Area Crime-Stoppers program.