You are here: Home / Military / Remembering D-Day at the Wisconsin Capitol (AUDIO) 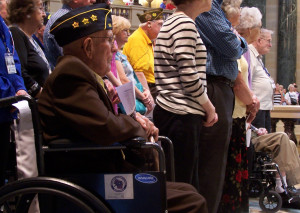 Veterans look on during a D-Day remembrance at the Wisconsin Capitol. (Photo: Andrew Beckett)

Hundreds of people gathered at the Wisconsin Capitol Friday, to mark the 70th anniversary of D-Day.

Veterans, their families, and current military were all in attendance for a noon-time ceremony remembering those who fought and died on the beaches of Normandy 70 years ago. State Veterans Affairs Secretary John Scocos says it was a day that changed the course of history, striking a blow against the Nazi regime in the effort to “defeat the evil forces of fascism and military imperialism.”

97-year-old Raymond Nelson, a World War II veteran from Beloit, was among those honored during the ceremony. Nelson shared his experience as a 1st Sergeant of a glider infantry unit, when they landed on the beaches on D+1.

More than 160,000 allied troops landed on the beaches of Normandy, France on this day 70 years ago, to fight Nazi Germany. Over 9,000 allied soldiers were killed or wounded.

Related: What does the “D” in D-Day mean?