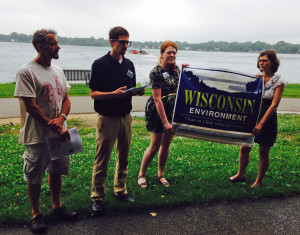 Industries dumped more than two million pounds of toxic chemicals into Wisconsin waterways in 2012. That according to a new report from Wisconsin Environment. The group’s Ben Knuth said Castle Rock Flowage in Adams County was the hardest hit watershed in the nation by reproductive toxins.

“Over 565,000 pounds of the industrial solvent methanol was dumped into it,” Knuth said. “It’s kind of crazy to me how much that is,” Knuth said during a press conference at Madison’s Brittingham Park.

The report is based on data reported to the Environmental Protection Agency’s Toxics Release Inventory. “These are not exagerated numbers, because these are the industries reporting them themselves,” Knuth said. Thilmany Paper was the worst toxic polluter in Wisconsin, dumping 8,279 pounds of toxic pollution into the Lower Fox River watershed in 2012.

Wisconsin Environment is advocating for restoration of Clean Water Act protections to all Wisconsin waterways.