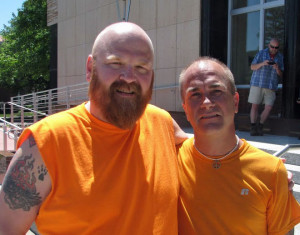 One of the few remaining Wisconsin county clerks not to issue same-sex marriage licenses was met with protesters Friday morning. About 30 people showed up at the Portage County Courthouse in Stevens Point.

Portage County Clerk Shirley Simonis said it’s been very difficult trying to decipher things — but personally, she wants everyone to be treated equally. “I am more than willing to issue marriage licenses, and want to, to any ressidents within Portage County, if it is within my legal realm of responsibilty,” she said.

A majority of Wisconsin’s county clerks have been handing out marriage licenses to same-sex couples, following Federal Judge Barbara Crabb’s decleration a week ago that the state’s ban on same-sex marriage was unconstitutional. But Crabb did not tell counties what to do in the wake of her ruling.

Crabb held a hearing in Madison Friday on the ACLU’s request to allow gay marriages everywhere in Wisconsin, and to have the state recognize same-sex unions in other states. She indicated that she would issue an injunction and a stay, which would effectively end the issuance of licenses to same-sex couples.