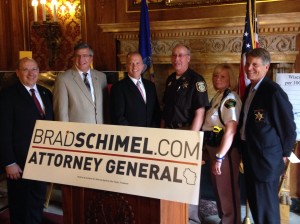 A candidate for Wisconsin attorney general on Monday rolled out a plan aimed at combating the state’s burgeoning heroin epidemic. Republican Brad Schimel says “it’s frightening” – heroin or prescription opiate overdose is now the number one category of accidental death in Wisconsin.

Schimel was joined in Madison by law enforcement and state Representative John Nygren, the Marinette Republican who was instrumental in passage of a bipartisan package of heroin related bills.

“This is only going to get worse,” said Schimel. “This is no time for our attorney general to learn while they earn.”