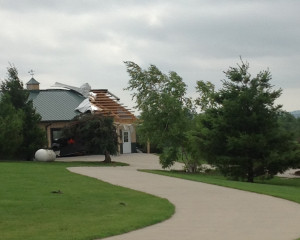 The latest round of severe weather to roll across southern Wisconsin included an apparent tornado touchdown near Highland in Iowa County. “I know we have some houses that are missing roofs, and we’ve got some damage from trees falling on homes” as well as damage to farm buildings, said Iowa County Emergency Management Director Keith Hurlbert.

The National Weather Service said the twister landed around 11:00 p.m. and caused a swath of damage from Highland to near Dodgeville. Brian Hahn of the Weather Service said straight line winds could have also been the culprit. There were no reports of injuries. NWS meteorologist Marsha Cronce said she’s keeping track of the number of tornadoes this season. “We were up to ten, last night there was for sur one more.” Wisconsin has an average of 23 tornadoes each season.

Elsewhere, a grain elevator fell near Oregon. Officials reported a mudslide on Highway 60 in Crawford County. Pardeeville in Columbia County had up to one-and-three-quarter inches of rain in just 20 minutes. Baraboo in Sauk County had up to two-feet of street flooding. Trees and power lines fell near Fennimore in Grant County. A flash flood watch is in effect until Monday evening for much of southwest Wisconsin. The Weather Service said the ground was so saturated in that region, it could cause already-high rivers and streams to go over their banks. The overnight storms were leaving Wisconsin around four this morning. Forecasters said another round of heavy thunderstorms is due in Monday afternoon and evening.