You are here: Home / News / Support for paid family leave 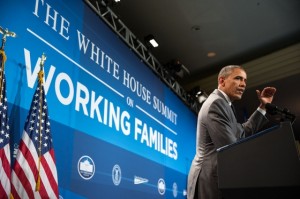 President Barack Obama is calling for paid parental leave and other family-friendly policies. Martha De La Rosa is chapter director for 9 to 5 Wisconsin and attending the first White House Summit on Working Families.

“Paid sick days, paid family leave, is very critical to low-income families,” she said. Some companies offer paid family leave, but the 1993 Family Medical Leave Act only requires employers to provide unpaid leave for medical and family reasons. “This is not solely a woman’s issue. This is a working families issue, and I don’t care if you’re poverty level making $18,000 a year or $160,000 a year.”

Currently only three states – California, New Jersey and Rhode Island – have paid family leave in place, as do most other developed nations. De La Rosa said there are costs to doing nothing. “This is not a tax, this is more of an assurance program,” said De La Rosa. “I understand that there are start-up and administration costs. I guess I turn the question back as ‘what costs are we paying already.'”

The White House said the Labor Department would set aside funds to research paid-leave programs, and that the Obama administration would support a federal law establishing paid family leave. Although congressional Democrats earlier this year introduced a bill that would provide three months of paid leave, financed through a 0.2% increase in employee and employer payroll taxes, the administration has not specifically endorsed that measure.