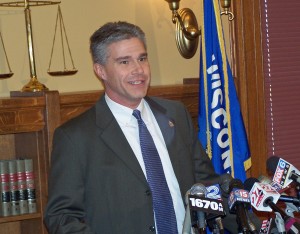 Wisconsin’s attorney general is asking a federal appeals court to block a judge’s ruling that overturned the state’s ban on gay marriage.

The Department of Justice filed an emergency motion this morning with the U.S. Court of Appeals Seventh Circuit, asking for a temporary stay of a decision by Judge Barbara Crabb. Friday’s ruling struck down Wisconsin’s 2006 constitutional amendment banning same sex unions and resulted in a wave of gay marriages over the weekend in Dane and Milwaukee counties.

This morning, a handful of other counties started issuing licenses as well. However, several county clerks did turn away couples, saying they are waiting for more direction from the state.

Van Hollen says a stay is needed to preserve the status quo while the state appeals the decision and will prevent confusion over Wisconsin’s marriage laws.

The attorney general made a similar request on Friday for Crabb to stay her decision. A phone conference on that request is scheduled for this afternoon.