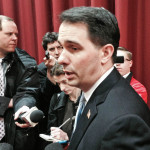 Governor Scott Walker says conditions are improving for the creation of new business startups in Wisconsin, even though a recent report shows the state lagged the much of the nation in that area during 2013.

A report from the Kaufman Foundation found Wisconsin created 170 businesses for every 100,000 adults in 2013, putting it at 45th in the nation for entrepreneurship. Governor Scott Walker says those rankings reflect the fact that there really has not been any money the state could use in recent year to help new businesses get off the ground. Walker says governors have talked about it for years, but “we’re the first ones that actually put money in,” in the form of a $25 million venture capital fund established by the Legislature last summer with matching funds from the private sector.

Speaking to reporters Wednesday after a speech to the Wisconsin Entrepreneurs’ Conference in Madison, Walker said he wants the fund to make investments in businesses like the state has with the UW System and technical colleges. “If we see the demand and we see the number of deals pending grow, when we see that impact, certainly it (the fund) will grow in the next budget.”

Before that can happen though, Walker says it’s important to show taxpayers these types of investments will work. “Some people are talking about bigger dollar amounts. To me, I think the taxpayers want us to show that it can work,” Walker says. “If it does, we’ll certainly put more money into it.”