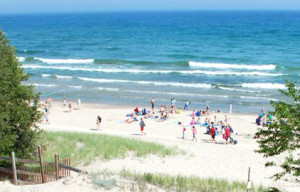 A national environmental group says Wisconsin has the eighth worst beaches among 30 states which border either oceans or the Great Lakes.

The largest known cause of the contamination, which results in beach closings and health advsories, is stormwater pollution. The Council says untreated sewage spills and overflows are also frequently to blame. Great Lakes beaches tend to have higher E. coli levels than their ocean counterparts, mainly because the Great Lakes don’t have the water circulation levels seen in the oceans.