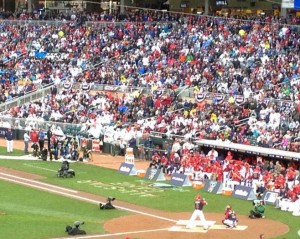 Cespedes clubbed a total of 30 home runs during the competition.

Frazier knocked out Miami’s Giancarlo Stanton, 1-0 as Stanton’s home run swing left him after his opening round.  Stanton hit 6 long home runs and received a bye into the semifinal matchup against Frazier.

While others have won two home run derby’s before, it’s believed Ken Griffey Jr. was the only player to win consecutive titles until Cespedes accomplished his second straight title last night.

Baseball’s All-Star game will be played tonight.  St. Louis  right hander Adam Wainwright will get the start for the National League.

The American League will counter with Seattle ace Felix Hernandez.