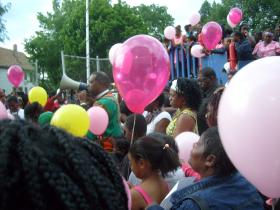 Hundreds of people turned out Monday night in Milwaukee to pay tribute to a 10-year-old girl who died over the weekend, almost two months after she was caught in the crossfire of a shooting.

Sierra Guyton died Sunday when she was taken off life support at Children’s Hospital of Milwaukee. She had been hospitalized in grave condition since May 21 because of injuries she received during a shooting near Clarke Street Elementary School. She was on the playground when two men opened fire on each other and she was struck in the head by a bullet.

Dana Simmons lives about 10-blocks west of the playground, but came out to pay her respects to the family. She says her “heart goes out to the family,” and even though she doesn’t know them, the senselessness of the shooting makes her worry about her own grandchildren.

Police have arrested 18-year-old Sylvester Lewis and 28-year-old Jamey Jackson in connection with the shooting. Lewis is accused of firing the shot that hit Guyton, while he was firing at Jackson and a group of other men because what police say was a dispute over stolen clothing.