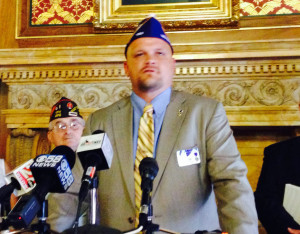 Democrats in Madison propose a fix for a law they say will harm veterans with asbestos poisoning. Governor Scott Walker signed a heavily lobbied bill into law last March despite opposition from veterans groups and Democrats. Walker said the bill was about “ensuring transparency in the lawsuit process to stop trial lawyers from double dipping.” State Representative Dana Wachs of Eau Claire, the author of this bill, said “there has never been one instance of that happening in the state of Wisconsin. Never.”

But Wachs and other lawmakers say veterans can be harmed by the current law. Jason Johns with the Military Order of the Purple Heart spoke for state veterans groups, which opposed the original bill. “When 100,000 veterans stand up united on an issue, it shouldn’t be a matter of what are the technicalities, whose right, whose wrong,” Johns said during a Capitol press conference on Wednesday. “When you see that kind of opposition from veterans groups, it clearly shows that this is wrong for veterans.”

Wachs intends to introduce the bill in the upcoming legislative session.