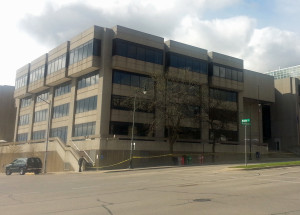 A fire at a Wisconsin state office building on May 15th caused a lot more damage than was first believed.

The state Department of Administration now says that the fire at the GEF1 building in downtown Madison, which houses the Departments of Workforce Development and Children and Families, caused $15 million in damage. The estimate is based on discussions with the state’s insurance carrier, and it’s a lot more than the $350,000 in damage originally estimated by the Madison Fire Department. Taxpayers will cover a $3 million deductible.

The higher damage estimate is based on removing soot and smoke damage from the building, removing the smell of smoke from thousands of files, cleaning the ventilation system, replacing furniture and electronics, and relocating about a thousand employees who normally work in the building.
Officials say it appears that an electrical problem caused the fire, but the cause has not been finalized.

Meanwhile, DOA officials say the remediation and repair efforts remain on track, and the agency still expects workers to begin returning to the building sometime in early August.