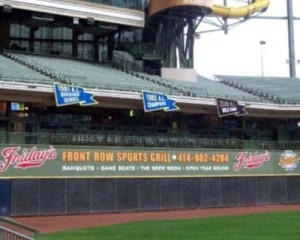 The Milwaukee Brewers say after an overnight fire in the kitchen area of Fridays restaurant at Miller Park, most of the operations and fan accommodations will be back to normal for tonight’s 7:10pm contest against the Cincinnati Reds.

A few areas sustained water damage and will not be operational until further notice.  These include Fridays Restaurant, the escalators and elevators in the left field area, the left field Loge concession stand, and the Miller Park Conference Center Meeting Rooms on the Club and Terrace Levels.

Fans who have tickets in the Fridays seating area are being contacted by the Brewers for alternate seating options.