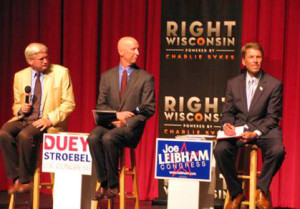 The Republican candidates for the 6th Congressional District meet on stage. (Photo: KFIZ)

The three candidates vying for the Republican nomination in Wisconsin’s 6th Congressional District met on stage Tuesday for a debate on issues ranging from Common Core to legalizing marijuana. State Representative Duey Stroebel (R-Saukville), along with state Senators Joe Leibham (R-Sheboygan) and Glenn Grothman (R-Campbellsport) are seeking the GOP nomination for the seat currently held by U.S. Representative Tom Petri (R-WI), who is retiring at the end of his current term.

Stroebel argued the out-of-control spending in Washington is the result of people who don’t say “no,” such as his opponents. He argued the “temperature in the kitchen is gonna get a lot hotter in Washington…than Madison, and we need strong conservative leaders.”

Stroebel referred to votes by Leibham and Grothman on budgets during Governor Jim Doyle’s administration. Grothman argued that, if Stroebel had done his homework, he would have realized that Republicans were in control of the Legislature for a portion of Doyle’s terms in office. “There were times in which Jim Doyle was the governor in which we had a Republican Legislature…and we did a good job of reining in the spending that Jim Doyle wanted to do in those budgets.”

Leibham said it was laughable to suggest he was a big spender, noting that he was among the lawmakers who focused on “getting the state’s fiscal house in order” during the 2010 budget process.

All three candidates also shared their positions on immigration, showing agreement on the idea of securing the nation’s borders. Grothman also voiced concerns that the United States has become a welfare magnet for the western hemisphere.

Grothman, Leibham, and Stroebel will face each other in the August 12 primary. The winner will go on to face Democrat Mark Harris, the Winnebago County executive, in the November general election.