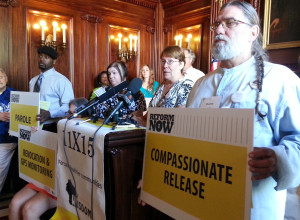 A coalition of religious leaders and prison reform advocates claim the Department of Corrections is keeping people incarcerated who should be granted parole.

The group, called WISDOM, says nearly 3,000 state inmates are eligible for parole, but are being kept behind bars because of lengthy sentences that were handed down before Wisconsin’s truth in sentencing law was passed in 2000. The Reverend Jerry Hancock, who works with a prison ministry group, argues it costs the state $96 million a year to keep those people incarcerated.

The group argues the Department of Corrections has reduced the number of inmates being granted parole since Governor Scott Walker took office by almost 50 percent. Hancock and others are calling on state officials to be more transparent about the process and what inmates can do to secure their release.

A DOC spokesman says parole numbers have dropped because the state’s truth in sentencing law has made fewer inmates eligible for release.