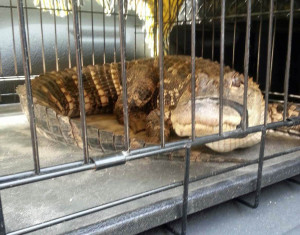 Still no word on how an alligator ended up in Sheboygan. Michael Clutter is a Department of Natural Resources Warden who found a placement for the four-foot long reptile after the animal was captured by sheriff’s deputies last Sunday, after a motorist spotted it near the Sheboygan River.

Small Scale Reptile Rescue is a Milwaukee area organization that works with shelters and animal control agencies to assist in the rehabilitation and finding suitable homes for abandoned and seized reptiles. The organization sends alligators to alligator farms but will not allow the general public to receive them. The organization transported the animal to the Chicago Herpetological Society this past Tuesday evening.

Clutter said media attention may help generate some leads, but so far they don’t know who had the gator or whether it escaped or was deliberately released. He speculates that it just became too much, for whoever had it. “They get too big and people don’t know what to do with them. So they cut them loose and they become everybody’s problem,” he said.

Anyone with information on the alligator should contact the DNR Tip Line – 1-800-TIP-WDNR. State law regulates the introduction, stocking and release of wild animals, and violators can face a forfeiture of $539 for the release of a wild animal.

Clutter said the gator would likely be a goner eventually: the reptiles can’t survive anywhere temperatures routinely get below freezing for extended periods.