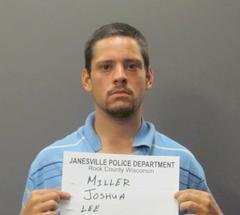 A 23-year-old Janesville man is charged with two counts of capturing an image of nudity without consent, after police arrested him in the women’s rest room near the Palmer Park wading pool.Janesville Police say they arrested Joshua Miller after he was found hiding in a stall in the women’s bathroom last Thursday. According to a criminal complaint, Miller had a cell phone hidden in his shoe which contained at least two videos of partially undressed little girls.Miller was taken to the Rock County Jail and released on a signature bond.Police are looking to speak with anyone who may have used the women’s rest room near the Palmer Park wading pool between 5:00 and 6:00 p.m. last Thursday.