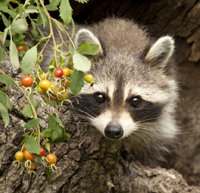 “Keep wildlife wild.” That’s the advice of Manitowoc County Department of Natural Resources Warden George Protogere, who’s fielded plenty of complaints concerning people taking wildlife out of the wild and attempting to keep them as pets.

Protogere said it’s illegal to possess a wild animal, unless the animal is sick & you take it to a wildlife rehabilitator. “People are taking baby robins, rabbits, fawns, and wanting to make pets out of them. Not only is it illegal, but it could actually harm the animal. When people get involved with wild animals it causes stress, and that can cause them to die,” he said.

There can also be health problems for people who take in wild animals. “There are diseases that these animals have, or could pick up,” he said, citing the case of a family who had taken in two baby raccoons and were allowing their kids to play with them. “Raccoons are notorious for diseases, even though they don’t look sick.” The people involved were having those animals lick their child’s face and sleep with them.