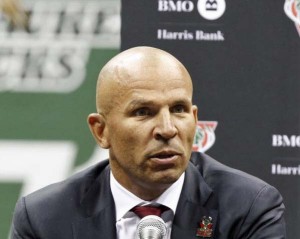 Kidd was introduced to the media at a Wednesday morning news conference at the BMO Harris Bradley Center.

Kidd left the Brooklyn Nets after one season, making the playoffs after a 44-38 regular season finish.  The Nets won their first round playoff series against Toronto, then bowed to Miami in round two.

Kidd agreed to a three-year contract worth $15 million.  It brings his salary in line with recent deals given to New York’s Derek Fisher and Golden State’s Steve Kerr.

The hiring process was far from smooth.  Word leaked out that co-owners Marc Lasry and Wes Edens were meeting with Kidd, while Larry Drew was still the Bucks head coach.

AUDIO: Marc Lasry is asked why they bungled the process :17

AUDIO: Lasry on why they kept GM John Hammond out of the loop :13

The Bucks ended up sending a pair of second round picks to Brooklyn for the right to sign Kidd.

Kidd was looking to become head of basketball operations in Brooklyn, but the Nets balked and the relationship between the two soured.  Kidd comes to Milwaukee and will now have to work with Bucks General Manager John Hammond.

Kidd said he’s excited to start meeting and working with young Bucks players in Las Vegas next week for the start of the teams summer league.  GM John Hammond is excited to be working with Kidd as well.

AUDIO: John Hammond is excited about people talking about the Bucks :10