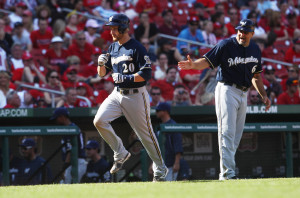 Jonathan Lucroy had been mired in a slump, hitting .200 in his last 25 games.  Last night, Lucroy clubbed a pair of home runs, including the walk off game-winner as the Milwaukee Brewers beat the Cincinnati Reds 4-3 at Miller Park.

Ryan Braun and Aramis Ramirez both added home runs for the Brewers, who have taken the first two games of the series, handing the Reds their fifth straight defeat.

Lucroy’s game winner came in the 9th off of Sam LeCure to break a 3-3 tie.  He also homered in the sixth.

Rookie Jimmy Nelson worked 6-innings, allowing 3 runs on four hits but wasn’t involved in the decision.  The win went to Francisco Rodriguez (4-3), who pitched a scoreless top of the ninth to set the stage for Lucroy.

The Brewers entered the series having dropped 7 of 10 games against the Reds.  But they’ve won the first two games of the series and play for the sweep this afternoon.  Kyle Lohse (10-4, 3.16) faces Mike Leake (7-8, 3.63) in the pitching matchup.