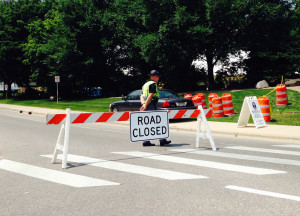 Hundreds of police, fire fighters, and other first responders descended on the University of Wisconsin-Madison campus Thursday morning, after a report of a bomb explosion at Camp Randall Stadium. They worked to quickly secure the area and carry away “blood-spattered” victims caught in the blast.

The bomb was not real and the injuries to volunteers were fake as well, but the response was a real attempt to gauge how emergency personnel would respond in the event of a real explosion during a major public event. UW-Police spokesman Marc Lovicott says it was all part of a training exercise called “Operation Wisconsin Dawn,” a real-time response event where fire and police department were called in to respond from their normal day-to-day operations to a major catastrophe.

The event focused on a fictional “fun run” with a fake explosion taking place at about 7 this morning and the response efforts ran through most of the day Thursday. Lovicott says it was patterned after the Boston Marathon tragedy, and was full-scale test that was meant to be “as real as we can make it.”