You are here: Home / Packers / Nelson looking for $10-million a season from Packers

Jordy Nelson is entering the final year of his contract with the Green Bay Packers and is seeking a long-term extension with the team. 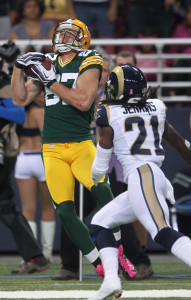 ESPN.com’s Rob Demovsky is reporting today that Nelson is seeking a deal worth at least $10-million per season.  His current contract averages $4.2-million a season and ranks 34th among all NFL receivers.

Nelson is set to earn $3.5-million this season, part of the three-year deal he signed in 2011 worth $12.6-million.  The contract extension turned out to be a bargain for the Packers.  Nelson said he is comfortable with the decision he made in 2011.

Nelson isn’t the only key receiver that the Packers must consider when dealing with extensions.  Randall Cobb is also entering the final year of his deal.  It’s likely the Packers would like to sign both.

The Packers have more than $13.6 million in salary cap space at this time.

Nelson and his Packers’ teammates will report for physical’s and testing Friday morning.  The team starts training camp workouts on Saturday.