You are here: Home / News / Netting at Capitol, 3 years ago 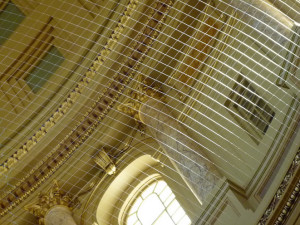 Three years ago today state workers put what was ultimately short-lived netting across the state Capitol rotunda. The decision to drape the netting just below the dome in Wisconsin’s statehouse came shortly after an altercation over a red heart-shaped balloon. The contraption was installed overnight just above the fourth floor of the historic building — at the trumpeter balcony level. A state worker had been arrested for popping a protester’s balloon earlier that week. Scores of other protesters then brought helium-filled mylar balloons to the Capitol and released them into the dome, leaving state workers with the task of retrieving them. 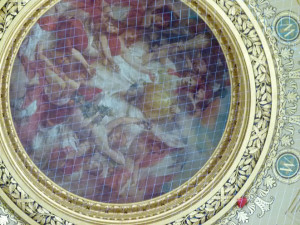 The net was installed to catch those balloons before they reached the top and rubbed against the mural — potentially causing damage to the old artwork. The large net was removed a couple days after it was installed. Some people complained their view of the dome was obscured, others said it looked tacky.Meanwhile, the protester who was shoved by the state worker in 2011 during the daily protest sign-alongs — after she allegedly taunted him — was eventually paid $19,000 to settle her civil lawsuit with the state. The public employee no longer works in the Capitol building.