You are here: Home / Packers / Packers could be headed for London 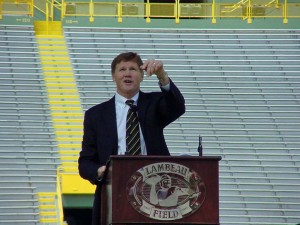 The National Football League wants the Green Bay Packers to play a game in London and could happen as early as next season.

Speaking at the Packers annual shareholders meeting on Thursday, team President and CEO Mark Murphy said the Packers would welcome a chance to play in London but it can’t be a home game.

Playing at home nets considerable more than the split they would get to play in London.  The Packers get to keep the money from luxury box fees, parking, concessions and pro shop sales when they play at home and that’s far too much to give up to give up a home game.

Murphy said there’s only certain teams that play home games in London, teams like Jacksonville, St. Louis, Atlanta and Oakland, teams that don’t fill their own stadiums on Sunday.

The NFL has three games planned in 2014 and Atlanta, Oakland and Jacksonville are the home teams in those games.

The Packers are scheduled to play a road game against Oakland in 2015 and that could be a possibility.

AUDIO: Murphy says the Packers haven’t played in London yet for a reason :22

Former Packers quarterback Brett Favre could be returning to Lambeau Field this season after all.  Murphy said the visit would be just that, not a jersey retirement ceremony.  That is expected to take place next year.