You are here: Home / Packers / Packers wrap up 2014 shareholders meeting 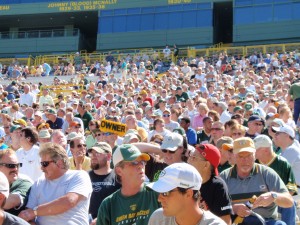 The Green Bay Packers now have 112,000 names on their season ticket holder waiting list.  That announcement came from Packers President and CEO Mark Murphy at the teams annual shareholder meeting at Lambeau Field.

Following the Lambeau Field expansion last season, the Packers seating capacity grew to 80,750.  That’s the second largest seating capacity in the NFL.  Fed Ex Field, the home of the Washington Redskins has the largest capacity at 85,000.

Murphy explained the new “pay as we play” playoff ticket policy.  That was instituted in this past offseason after the Packers struggled to sell out last seasons home playoff game.  The previous policy forced fans to pay for any potential home playoff game even before the regular season ended.  They could get a refund or apply the money to the following season if the Packers didn’t wind up making the playoffs.

Murphy also told the more than 12,000 shareholders and their guests that Lambeau Field was voted the #1 fan experience in the NFL for a third straight year.

Murphy wrapped up his portion of the program by saying the Packers are in a strong position to compete for championships for a long time.