You are here: Home / News / Popularity in paddleboarding has DNR urging safety 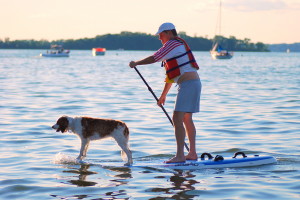 Paddleboards are showing up more and more often on northern lakes. With their popularity skyrocketing over the past decade, the DNR is stressing good water safety practices.

DNR Recreational Safety Warden Mark Little says a life jacket is required when stand up paddleboarding. “It doesn’t have to be worn, although we encourage you to wear it. Most people strap it down or bungee cord it down so it’s at least with them.”

The DNR says paddleboards are considered boats, and life jackets are required on all boats, motorized or nonmotorized. Little says visibility is also an issue with paddleboards, and the DNR encourages paddleboarders to sport bright and reflective clothing and paddles. “If it’s wavy out, there’s less visibility depending on the weather, the lighting. Other boats may not see them as well. So when you’re on a paddleboard, defensive paddling should be the rule. So you really have to be aware of what’s around you because the visibility is so much less.”

DNR records for the 2012 boating season show 16 deaths. Five of those deaths, about one third of that total, have involved the smaller paddle boats — kayaks, canoe, rafts.

The DNR offers a free online paddling safety course for new paddlers to learn the basics and as a great refresher for experience paddlers.