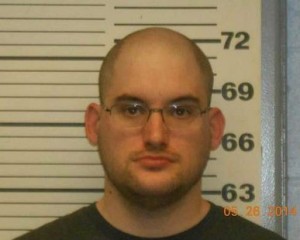 A Plover man accused of killing his stepfather with a baseball bat has been ordered to stand trial in Portage County.

A judge ruled Monday that there was enough evidence to charge 32-year-old Andrew Pray with first-degree intentional homicide in the death of 77-year-old Christopher Bonnstetter. Pray is accused of beating Bonnstetter with a baseball bat on May 26, while the man lay on the floor resting with Pray’s mother in the home where all three lived together. Bonstetter died on June 3 after being taken off of life support.

Assistant District Attorney Cass Cousins called four witnesses to the stand during Monday’s preliminary hearing. Plover officers Brent Thurer and Michael Tracy, Coroner Scott Rifleman, and State Pathologist Dr. Robert Corliss. Cousins says the court heard more than enough to bind Pray over for trial. “A case like this is extraordinarily serious, so we do have the hearing and try to be as comprehensive as possible. I think that, in terms of what relevant facts are going to come into play later on in the event of a trial in this case, I think most of them were heard.”

Pray sat motionless in court, and did not speak with his attorneys. The defense did not cross examine Coroner Scott Rifleman, and had few questions for Dr. Robert Corliss.
Cousins says there are no plea deals in the works, and they are preparing for a jury trial at this point. “There have not been any discussions or negotiations at this point, just simply far too early in this case. There’s a preliminary hearing that is done now and the defendant’s bound over, but I think any developments in resolving this case without trial will occur at the pretrial conference in August.”

Pray remains in jail on $250,000 bond, and will be back in court August 18th for a status conference.