You are here: Home / News / Primary election 2 weeks out, absentee voting under way 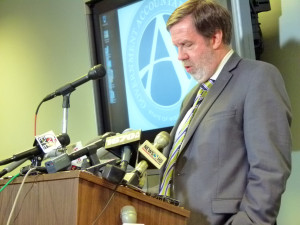 Wisconsin’s primary election is scheduled for August 12th, but absentee voting has already begun. “People can go to their municipal clerk’s office and cast an absentee ballot,” says Kevin Kennedy, director and general counsel of the Government Accountability Board. “The hours do vary by municipality, but they can only vary within a window from 8 in the morning til 7 at night. There is no in-person absentee voting allowed on the weekend at all anymore.”

The purpose of the primary is to winnow down the selection of candidates and pick someone who’ll move on to the general election in November. “The partisan primary contains a lot of names because what this is, is sort of a winnowing process where you determine … the voters get to pick who is going to be the nominee of a particular party.”Primary elections are partisan. That means voters can only pick candidates from one political party — Democratic, Republican, Constitution, or an independent. Cross-voting will result in an invalid ballot. Voters can split their ticket in the general election in November, if they choose.Kennedy says the biggest question his office gets from voters is, “Why can’t I vote in both primaries?”