You are here: Home / Packers / Variable Pricing introduced to Shareholders 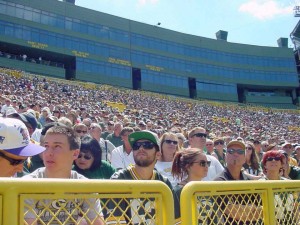 Green Bay Packers President and CEO Mark Murphy told shareholders on Thursday at Lambeau Field that ticket holders could be introduced to variable ticket pricing as early as next season.  Murphy said ten or more NFL teams are already using variable pricing to some degree.

Variable ticket pricing means a team can charge different prices for different games.  For example, they could charge less for a preseason game and more for a marquee game like the yearly matchup between the Packers and the Bears at Lambeau Field.

The Packers rank 17th in the 32-team league in ticket prices, exactly where they’ve said they want to be.  Murphy said they try to strike a balance between being fair to their fans and to visiting teams, which gets a cut of ticket revenue.

The Packers said 14,759 people attended the meeting and another 10,000 more watched it live online.

The Packers rank ninth in the NFL in total revenue, $324.1 million, and seventh in operating profit, $25.5 million.  They are in the lower half of the league in total expenses, $298.5 million.