You are here: Home / Business / Walker ad goes after Burke on outsourcing 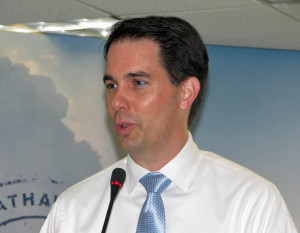 Governor Scott Walker’s newest campaign ad focuses on outsourcing of Wisconsin jobs by Trek Bicycle, the firm owned by the family of opponent Mary Burke. Walker criticized the Democrat during a campaign stop in Wausau on Wednesday.

“They’ve taken state taxpayers dollars to in turn ship jobs overseas. When she’s talking about that, criticizing that of other companies, I think voters need to know that that’s something that Mary Burke has profited from a company, her own family company, that’s taken the taxpayers money and done just exactly that,” the Republican governor said.

The Walker campaign ad features a grandmother reading a bedtime story – one which features images of Burke holding bags of money. Burke has said she had nothing to do with Trek’s decision to create manufacturing jobs in China, although she still owns stock in the company.

“Scott Walker should be ashamed of himself,” said Burke campaign spokesman Joe Zepecki. “Attacking a great Wisconsin company, that his own flagship economic agency held up as an example of a model business just last year, for political purposes is despicable. Trek makes more bikes in the US than any of its competitors, employs nearly 1,000 people right here in Wisconsin. It’s payroll has doubled over the last 20 years and it injects almost $100 million into the state economy every year.”