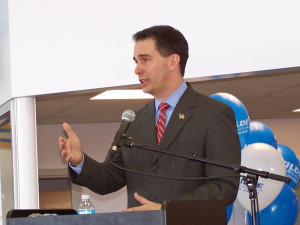 Governor Scott Walker says he’s concerned that political motivations could encourage the Obama administration to hold up the approval of a proposed iron ore mine in northern Wisconsin.

The state’s six Chippewa Indian tribes asked the U.S. Environmental Protection Agency this week to step in on the proposed Gogebic Taconite mine, citing concerns that the project will hurt water supplies and fisheries in Iron and Ashland counties that are protected by treaty rights. If the agency gets involved, it would veto other governmental decisions on things like dredging, and digging close to waterways.

During a stop in Rhinelander on Wednesday, the Republican governor said he hopes the EPA will not step in to evaluate the environmental effects of the project before other state and federal agencies are given an opportunity to act on any permits for the project. Walker said Wisconsin laws already offer strong environmental protections and that he’s committed to a “safe and environmentally sound mining process.”

Walker says he would have no problem with EPA involvement, if it bases its decisions on science “as opposed to plain politics.”