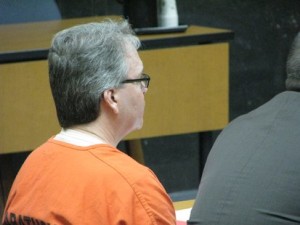 A former Wausau businessman has been sent to prison after being convicted of numerous felonies, including sexual assault of two children, racketeering, and fraud. 54-year-old Jay Fischer was already facing the racketeering and fraud charges for illegal mortgage lending practices when he was then accused of fondling his stepdaughter.

In court Wednesday, prosecutors were seeking the maximum possible sentence for all charges, while the defense argued Fischer should be put on probation under a withheld sentence. Judge Greg Huber looked at the severity of the crimes and did not buy the defense’s argument for probation. “Years later, after you already admitted to Old Republic that you had basically stolen this money, you went ahead and created more victims, so I think that this gravity of the offense requires that there be prison, here.”

Fischer was sentenced to a combination of prison time and extended supervision, with many of the sentences to be served consecutively. Overall, Fischer will be incarcerated for a total of 11 years followed by another 18 years of extended supervision. Fischer gets credit for 552 days already served in the Marathon County Jail.

Judge Huber said he doesn’t often see cases with long-term actions and the effects on victims like this one.  “The crimes you committed were serious crimes. The sexual assaults against your stepdaughter and your daughter, the taking of $1.2 million through various manners of business puts it in a, (pause) It’s a figure that we don’t normally see in court.”

About a dozen observers were in the courtroom as Fischer was sentenced, including his now ex-wife, who was emotional while reminded of the crimes against the children, and had to be assisted from the gallery for a short time.

Judge Huber commented about how Fischer’s actions harmed the child victims.  “The fact that she was made to appear to be the liar, making this up, the fact that she had to live through her own private hell knowing no one who loved her believed her because of your actions and your influence, and that persisted for quite a while until recently when people finally believed her.”

Fischer used to own Valley Title, and handled thousands of mortgage financing and refinancing transactions. He was also the owner of Krazy J’s Campground near Marion in Waupaca County.