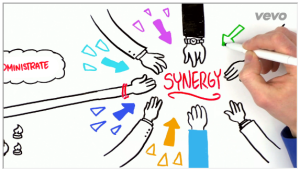 Weird Al’s newest video has a connection to the Badger State.

“When we got the call from Al and his company, we asked the same question: ‘Why? Why’d you pick us?'”

The Fitchburg company has made a lot of long-form training and marketing videos for corporations using popular buzzwords — many of which are included in Weird Al’s parody, including “synergy” and “administrate.” Oakland says, “When a parody artist picks you to kind of epitomize the parody, you gotta have a little humor about it.”

Oakland says his entire staff of 18 — all Weird Al fans — had to keep this a secret for nearly a year. “Yeah, the hardest part was when he invited out to a concert in Milwaukee and we got to go back stage and be at the concert and everybody got photos with him. They wanted really badly to be able to share those with their friends online.” He says everyone knew that waiting, keeping the secret and being able to share it on when the time was right would be more rewarding than the instant gratification.

AUDIO: As for making a “behind the scenes” video, Oakland says that would be “awesome.” :20

Mission Statement is sung to the tune of “Suite: Judy Blue Eyes” by Crosby, Stills & Nash. It’s the final music video in a string of releases on the new Mandatory Fun album.