You are here: Home / Crime / Courts / Zelich bound over for trial in suitcase bodies case 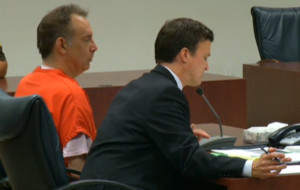 A former West Allis police officer has been bound over for trial on charges that he hid the bodies of two women in suitcases, which he then left along a rural road near Lake Geneva.  A Walworth County judge ruled Friday morning that there is enough evidence to try 52-year-old Steven Zelich on two felony counts of concealing a corpse, after suitcases containing the bodies of 21-year-old Jenny Gamez of Cottage Grove, Oregon and 37-year-old Laura Simonson of Farmington, Minnesota were found along a highway in the Town of Geneva on June 5.

During a preliminary hearing, sheriff’s detective Jeffrey Recknagel quoted the 52-year-old Zelich as saying he met both women in online chat-rooms, had dates with them for sex in hotels, and they then died after bondage sessions.  The detective said Zelich claimed to have had rough sex with both, and that the deaths were accidental.

Zelich’s attorney, Travis Schwantes, argued the charges should be dropped because the suitcases were left in plain sight. Schwantes argued the evidence does not establish that Zelich “hid” the suitcases, and that it was more likely “he placed them alongside the road to be discovered.”

Walworth County District Attorney Daniel Necci that there is no requirement under the law that something is “hid well” though, in order for there to be a crime. He pointed to testimony from detectives that Zelich admitted he killed the two women, drove around with their bodies in suitcases and kept them in his apartment, before leaving them alongside the road just days before a highway worker cutting grass found the cases. Circuit Judge Phillip Koss agreed, saying the location where the suitcases were left showed “these were not placed to be found.”

Judge Koss also questioned claims by Zelich’s attorney that the two women died accidentally, saying that it’s “not likely to be accidental when this happens two times.”
Zelich has not been charged with homicide in the deaths of either women. Walworth County authorities indicated earlier this week that the cases were being handed over to officials in Rochester, Minnesota and the city of Kenosha, where the deaths are believed to have occurred. Zelich will be back in court July 17th for an arraignment on the charges of hiding a corpse.