The Green Bay Packers practiced today without both of their 2014 fifth round draft picks.  Wide receiver Jared Abbrederis (knee) and center 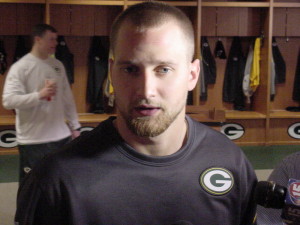 Corey Linsley (shoulder) were both sidelined.

Packers coach Mike McCarthy would only say that Abbrederis had a knee injury and Linsley a shoulder injury.

Abbrederis completed practice on Thursday and stayed after to catch extra passes off the JUGS machine.  He was a spectator during practice on Friday, perhaps a good sign that his injury isn’t one of a serious nature.

Both players are off to a strong start during the first week of training camp.